Press Releases of the Continental Corporation

Continental Enhances the Safety of the World’s Top Football Players

When the European football championship in Poland and Ukraine kicks off in National Stadium of Warsaw this summer, the athletes, as well as the tens of thousands fans, will be heading into a tournament characterized by long distances. Under the concept of the host nations, the teams that play in Poland during the group phase will to travel to Ukraine, for the quarter- and semi-finals, and vice versa. Should Germany qualify for the final on July 1 in the Ukrainian capital Kiev, the players will have traveled between 3,800 and 4,600 kilometers by the final whistle– depending on whether they finish first or second in the group phase.

HSR 2 for all team buses

In view of the distance involved, it is fitting that Continental is not only an official sponsor but also the tournament´s exclusive tire supplier. For the safe and comfortable transport of the players during this major European event, all team buses will be fitted with HSR 2 premium bus tire. Designed for demanding service in mixed regional and charter transportation, it can be used on both the steering and drive axles. It boasts excellent handling, smooth running as well as ride comfort and, in addition, are particularly cost efficient. 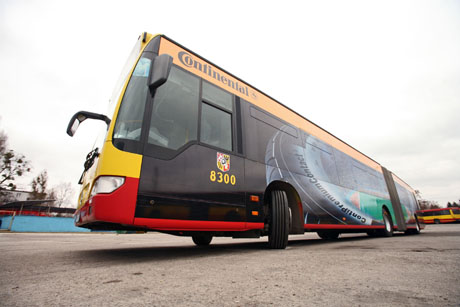 40 ContiBuses for fans at the Polish match locations

Not only the players, but also the fans benefit from the enhanced safety provided by Continental´s products. 40 so called ContiBuses will be used in the four Polish venues: Warsaw, Poznan, Gdansk and Wroclaw. These buses will help fans get from the fan zones to the stadiums on match days and boost the regular transport service in the cities free-of-charge on match-free days. The special European Championship edition HSU1 tire will be fitted on the buses. What distinguishes the event tire from the conventional HSU 1 tire is its special side wall design with stylized footballs and the yellow Continental logo. 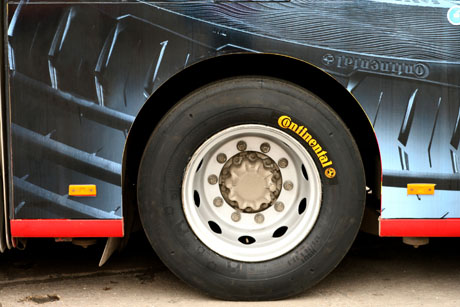 To ensure passenger safety and availability of the vehicle for the entire duration of the tournament, service technicians from the Conti360° network will check all tires on a daily basis. Nonetheless, should a tire go flat, quick help is on hand. For this purpose, two service vehicles with special technology will be stationed at every match location.

Additionally, vehicles of the UEFA officials will be fitted with nearly the entire Continental summer tire family. This includes the ContiEcoContact 5, ContiPremium 5 and ContiSportContact 5, passenger tires as well as the ContiCrossContact UHP for off-road vehicles and the ContiVanco series for vans.

Providing football pros with safety since 2003

And because football stars often own exceptional vehicles with powerful engines, a special safety training was developed in Hannover in 2003. Under the motto Pros test with Pros, numerous top athletes have since received tips for driving at the limit from professional safety trainers at the Corporation’s test track.

Football is a part of corporation`s history.

As marketing platform for improving the international brand awareness, football is for Continental, just a further logical step on a long road. Indeed, the close link between the company from Hanover and the spherical sporting object has a long tradition. The company generated significant sales from soft rubber balls already before 1900. As football quickly gained popularity in Germany in the 1920s, the corporation began to produce bladders for leather footballs, as well as stitched molded soles for gymnastic and sports shoes. Initial football sponsoring activities go back to the 1950s and supported Hannover 96, the football team of Lower Saxony´s capital. Back when professional sports as well as pitch perimeter advertising were still unknown and it was forbidden to advertise on shirts, Continental offered jobs in the Vahrenwald plant to the players Werner Müller und Rolf Paetz, who were both members of the 1954 champion team. After Hannover 96´s title win (secured by a 5-1 victory over the hot favorites 1.FC Kaiserslautern), the team photo, that hit the press was taken on the roof of the Conti building. 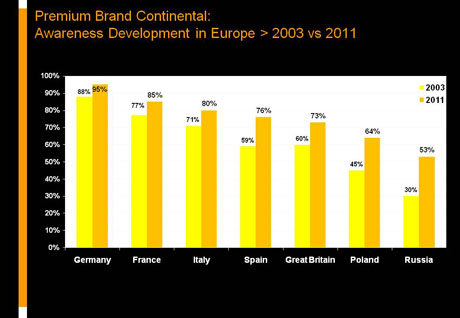 Football for Continental really became a meaningful marketing strategy in 1995 when UEFA decided to replace the outdated European cup with the Champions league. From its launch Continental was part of the game. The quality of football marketing reached an unprecedented level of professionalism and the Champions League enthralled sports fans throughout Europe. It was an ideal opportunity to draw the attention of potential customers and consumers to Continental tires, through a mutual interest. The involvement has really paid off. Brand awareness rose in all core markets already after the first season. The expression “Continental is football” still holds true today. 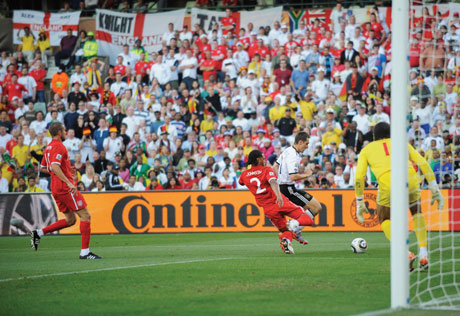 One of the leading sponsors in European football

In recent years, the company has developed into one of the leading sponsors of European football. Through the partnership with the International Federation of Association Football (FIFA) for the football World Cup 2006 in Germany and 2010 in South Africa Continental AG emerged into the view of sports fans for good. In Europe, the company was also involved in the European Football Championships in Austria and Switzerland in 2008 as well as this year´s tournament in Poland and Ukraine. On a national level, sponsoring has received an additional boost through the support of the DFB cup competition since the 2011/2012 season.

And Continental will remain on the ball in the years ahead. The sponsorship contracts with the German football association have just been extended until 2014. The planning for the 2014 FIFA World Cup Brazil™ is already underway. And the agreements with the European Football union for the UEFA EURO 2016™ in France have already been signed as well. 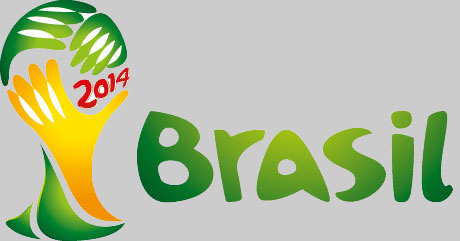 ContiTireNews | Safe on the road in winter with truck, coach and bus

Legal and standardized markings used on the tyre sidewall